In honor of the Nagra Stefan Kudelski, the inventor of the Nagra portable tape recorder, has died. His revolutionary creation changed filmmaking for ever, and came just as Kartemquin was born. In tribute, here are some thoughts by Gordon Quinn, Kartemquin Co-founder & Artistic Director:

"The very 1st piece of film equipment I bought was the Nagra III just before we formed Kartemquin when I was working as a freelance sound person. The plate that provided the crystal signal for the camera that I talk about in Morgan Johnson's Camera #1 video was a Kudelski accessory for the Nagra III. I already had one on my Nagra III to make it crystal controlled and just bought a 2nd one that we bolted to the camera to the synch for the DC to AC inverter that Danny Auerbach built.

In the 1990's when I went to Cuba to teach I brought our last Nagra a 4.2 with me and donated it to the Cuban film school, La Escuela Internacional de Cine y TV de San Antonio de los Baños (EICTV). The bias needed to be changed because no one was making tape with the old bias and it was going to cost a few thousand dollars. When I gave it to the guy who ran the sound department at the school he was thrilled and said that he could do the bias adjustment himself.

The last film we used the Nagra on was probably Golub (1988). After that we were no longer shooting film and even on Stevie (2003) (the last thing we shot on film), we were recording the audio on a time code DAT audio recorder.

The Nagra changed everything. It made all of the innovation in handheld cameras possible. Before it, I recorded sound on large Magnasyncs (that made so much noise I had to run cable into the next room) and on a Magnacorder (an early 1/4" recorder that had to be assembled in a sort of stack). It was quiet, but not anything you could sling over your shoulder like the Nagra."

More memories from Jerry Blumenthal, Kartemquin co-founder (the line breaks are his own):

"We used the nagra on everything 16 mm w/sound
until digital took over
it was for decades one of my best friends
...as a former u. of chicago no-hands-needed nerd
i learned from the nagra, along with the steenbeck
not to be afraid of "equipment"
…i even spoke to dead relatives through the nagra
& once the talent on a commercial
yelled at me, "back off sound-man"!
what an honor
hasta la vista, Stefan"

Thank you, Mr. Kudelski, for helping our work for so many years with your invention. 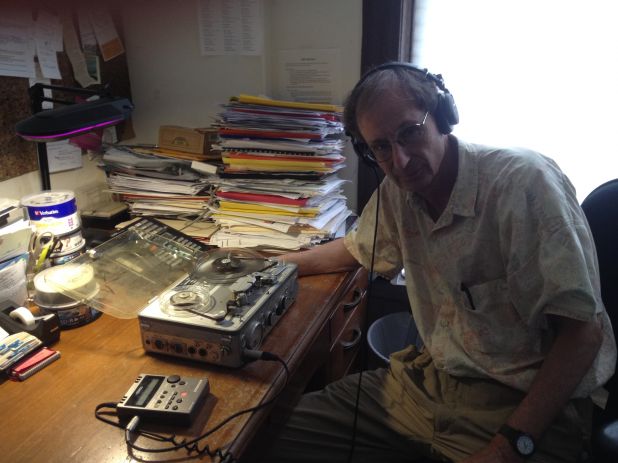 Photo: Kartemquin's Technical Director Jim Morrisette using his Nagra 4.2 in July 2012 to transfer 1/4" tape originally recorded in 1963 to a digital format, for our upcoming film The Trials of Muhammad Ali.